Keep your nose out of our business, candidate tells Amnesty International 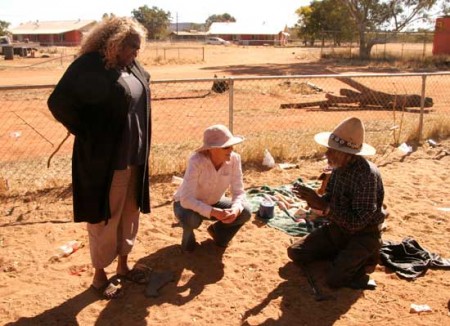 Country Liberal candidate for Stuart Bess Price has fired a broadside at two local representatives of Amnesty International for sticking their noses into Aboriginal business and has threatened to make a formal complaint.
Amnesty also put its foot in it when Secretary General Salil Shetty visited the Utopia region in October last year.

“I have some urgent questions for you that I expect to be answered in full by August 9 (tomorrow),” Ms Price emailed them, “so that I can tell my people and all of the people of the Stuart electorate of all ethnicities what your agenda is and why they should speak up for themselves.

“What makes you young whitefellas from southern cities think you can speak for us?

“What makes you think that we can’t speak for ourselves?

“Who are you and how long have you been in our country?

“What Aboriginal languages do you speak or understand?

“Why do you think you can represent my views to my own people better than I can?

“How do we get to vote for you, when are you standing for election so that we can have our say?

“How old are you and what are your qualifications that make you experts on my people’s problems,” Ms Price asked Mr Milsom and Ms Toovey.

Ms Price emailed: “I was born at Yuendumu. I speak Warlpiri fluently and know four other Aboriginal languages as well as English. I have worked as an interpreter/translator since I was fifteen.

“I am now a grandmother. My family owns all of their traditional lands through the NT Land Rights Act. My family has been involved in the development of outstations since the movement began in the 1970’s.

“My father tried unsuccessfully to develop an outstation at Yampirri where he was born. I supported him all that time. He died before anything was done for him. I have my own outstation at Kirrirdi which I have been trying to develop for thirty years with the support of my husband.

“We have not attracted any government support during that whole time. I worked for the Central Land Council for seven years. I know my people’s law, I know the country that I am kirda for through my father and kurdungurlu for through my mother.

“When your organisation has sent representatives here they have ignored me and my family. When Rodney Dillon came here he listened to me, told me that he heard what I had to say then reported to the government the exact opposite of what I had said. Then you sent someone calling herself a Yorta Yorta woman.

“She gave me two days notice of a meeting through a phone call to my husband. That was not enough time. She told him what was needed to solve the problems of my people. She had already decided without making any attempt to talk to me personally. At the time of these so called consultations I chaired the NT’s Indigenous Affairs Advisory Council.

“I was appointed by an Aboriginal woman minister of the NT government and served under two other NT Aboriginal woman ministers elected by the people of the Northern Territory. Your organisation sent a white blackfella from Tasmania, a wealthy man, and a woman from Victoria claiming to be indigenous who never met me or tried to talk to my people and you believed what they told you.

“Your organisation treated me and my people with contempt and you still do. Your organisation is undemocratic and racist. Would you send an Italian American of mixed heritage to Russia to consult with them meaningfully because he is of European descent and therefore will understand the Russians?

“Why do you think a physically white, English speaking Tasmanian would better understand my own people than I do? When your white supporters here in Alice Springs organise a meeting they are very careful to exclude the voices of those who disagree with them. They hand pick their Aboriginal spokespersons and then coach them on what to say. Rosie Kunoth Monks, Djiniyini Gondarra and especially Barbara Shaw do not speak for us.

“They have a right to their opinions and they can represent those who have given them authority to do that but they do not speak for all of us. Barbara Shaw has tried to deny my right to speak for my people on many occasions, her white supporters have publicly vilified me on the internet. You decide to promote and back the ones who think like you and ignore the rest of us.

“I am standing for election to the NT parliament against Karl Hampton. He is my nephew. He was elected by the people of Stuart to represent them in our parliament. I have never denied that fact. He has the right to speak for the people of Stuart because they voted for him. I think I can do a better job and I have asked the people of the electorate, which includes my family and Karl’s, to decide.

“Karl and I trust the people of the electorate to decide. The people you support do not represent the people of their electorates through a democratic process. But what is worse you then suppress the right of others to speak. You turn a deaf ear to those who are most vulnerable, to the most marginalised, to the women and children who are suffering so much in our communities and town camps.

“You take no notice of the NPY Women’s Council although they speak for the women who have sixty times the chance of dying from domestic violence than those in mainstream Australia. You go out of your way to deny their voice a hearing. So much for human rights.

“That is what happened when the UN’s special raconteur came to Alice. I know I was at the meeting. You are not interested in our rights you are only interested in your own agenda that you learned at the universities you attended down south.

“The best thing I can say about you is that you are well meaning but young, idealistic and naive, but maybe you are racist, arrogant and don’t give a damn about my people because you have your own agenda. When Aboriginal women in Central Australia ask for help, when they are killed, raped and beaten, when they cry for their abused children you ignore them and you support those who are oppressing them.

“When the government tries to do something for them you call them racist and you blather on about the UN. Ask the Syrians what they think of the UN. Then you send me a lecture on the homeland movement full of quotes from white researchers and lawyers with their own agendas.

“You treat me like a fool, like I know nothing. You are young, you are professionals, you come from rich families in Southern cities and yet you think that you can speak for my people and I don’t know what I am talking about. We now have a truly historical situation in Central Australia, we have two electorates with three Aboriginal candidates in each opposing each other. What makes you think we need you to talk to our people?”

UPDATE August 4, 9.13am: The source for this report is Darwin businessman and former 1Territory Party president, Braedon Earley (at left). This morning he went...
Read more