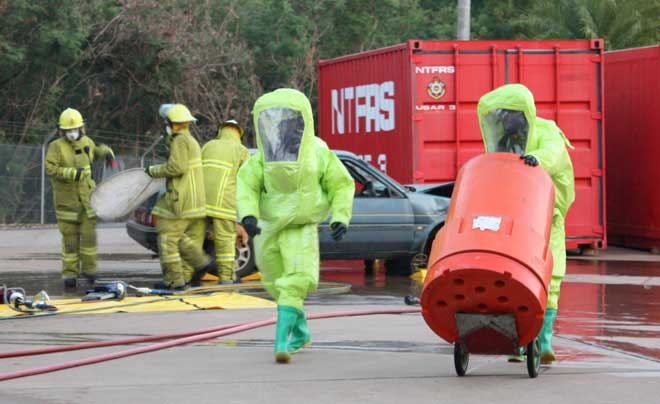 The NT Fire and Rescue Service in their HAZMAT suits. Their role is to ‘identify, isolate and contain’. Photo courtesy NTFRS.

The Alice Springs Town Council was challenged at last night’s meeting to take action regarding the proposed radioactive waste dump at Muckaty, Aboriginal land 120 kms north of Tennant Creek.
The key issue put to councillors was that local emergency services do not have the capacity to respond to an accident involving radioactive waste material on Alice’s road or rail networks.
This was argued by a deputation from the NT branch of United Voice (a workers union), the Public Health Association and the Beyond Nuclear Initiative.
The Alice Springs News Online asked the NT Fire and Rescue Service to comment on this proposition. We received this statement in reply:
“The Australian Radiation Protection and Nuclear Safety Division is responsible for management of radioactive waste.
“However if, for example, a transport incident occurred involving radioactive waste on a Territory road or railway, a multi agency response would be activated in accordance with existing Emergency Response plans to identify the material, isolate and contain until such time as the lead agency takes over management.
“The NT Fire and Rescue Service has equipment and training to undertake their duties of ‘identify, isolate and contain’.”
The deputation want council to support their call for an independent enquiry into long-term nuclear waste storage, “to get it right from the beginning”. The current proposal to store waste at Muckaty does not, they say, achieve world best practice nor is it based on scientific principle.
The key point regarding best practice is that the proposal will see long-lasting intermediate level waste being stored above ground while international best practice requires it to be stored underground. The above ground storage is an interim solution, they say, pending the establishment of a “deep underground geological disposal facility”.
As the government has made no progress on this to date, they argue that “‘interim’ storage in the NT is set to last many hundreds of years”. How ‘”to date” runs to “many hundreds of years” was not explained.
The failure of the proposal as they see it with respect to “scientific principle” is that Muckaty was not on the short-list as a “suitable” site when a national repository site selection study was undertaken in the 1990s.
It has become the only site under current consideration because it was nominated by the Northern Land Council, supposedly on behalf of traditional owners (one family group within the Ngapa clan).
The legal basis of this nomination is being challenged in the Federal Court on behalf of dissenting groups of the Ngapa clan. The Federal Minister for Resources and Energy Martin Ferguson is on the record (Australian Financial Review, March 14, 2012) as saying the government will respect the decision of the court.
If the court rules that the nomination is illegal, then it will be back to square one as Mr Ferguson is also on the record that a site can be considered only if it has been volunteered, an important difference, he says, between the laws of his government and the Howard government. 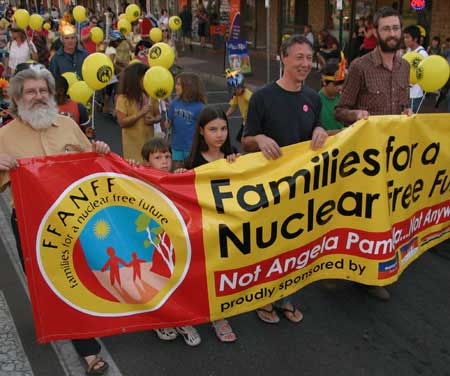 Arguably, however, the consent of one small group of traditional owners would not dispose of the issue, as the waste would have to travel across vast distances in Australia to reach the site and there can never be a risk-free transport route (the deputation point to recent incidents involving hazardous material, such as the derailment at Edith River in December last year). As world best practice for radioactive waste disposal also requires “informed consent”, they say, they are approaching local councils along the possible transport routes, to elicit their support for the independent enquiry.
The group argues that the waste from nuclear medicine should continue to be stored locally at the hospitals where it is used. The radioactivity of most of it is very short-term and breaks down very quickly, after which the waste is disposed of in local landfills. The small amount of long-term waste generated should be stored at Lucas Heights in Sydney, where it is produced, thus avoiding the problem of transport altogether, they argue.
Councillor Jade Kudrenko, a member of the Greens, suggested to her fellow aldermen that the issues, particularly in relation to the impact on emergency services, should be put on the agenda for council’s next committee meeting.
Cr Eli Melky wanted to know what else the deputation would like council to do.
BNI spokesperson Lauren Mellor suggested council could also write to the Federal Government to ask when local governments will be consulted on the issues. (Minister Ferguson has said that as soon as the litigation concludes, he will “consult widely with the parties that have rights, interests or legitimate expectations with respect to any nomination”.) She also suggested that council could push for the Local Government Association of the NT (LGANT) to raise the issues with the Federal Government  and that the council could consider itself the formation of a committee to oppose the waste facility.

Pictured, above left: The anti-nuclear lobby in Alice is persistent and well-organised. Here they take part in a festival parade in 2009. From the Alice News archive.