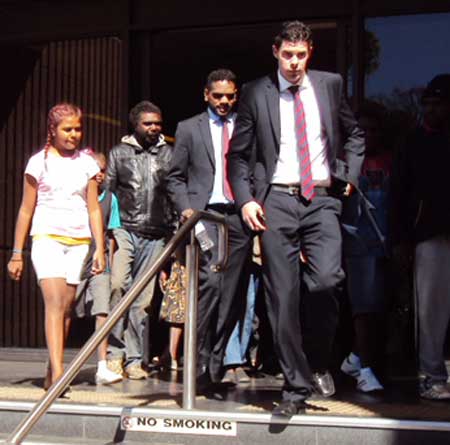 The decision is “unrelated to guilt”, says his defence counsel.

Liam Jurrah has been committed to stand trial in the Supreme Court in Alice Springs on a charge of assault causing serious harm, as well as three further counts of assault on three separate victims.
This is also the case for his co-accused, Christopher Walker and Josiah Fry.
Mr Walker’s lawyer, Tania Collins, told the court Mr Walker will be pleading guilty to the ’cause serious harm’ charge.
Mr Jurrah’s family and supporters in the courtroom and waiting for him in the lobby accepted the news quietly but appeared downcast.
Outside the court defence counsel Jon Tippett QC told media that moving the case from the Court of Summary Jurisdiction into the Supreme Court is “unrelated to guilt”.
He said he had expected the decision by Magistrate David Bamber to commit his client to trial. It was “obvious” but it was not a finding on fact or credit.
He said his client’s position is the result of problems that are “not of his own making”. This will be dealt with “at length” in the trial.
He said Mr Jurrah will plead “not guilty” and “our case is sound”. In the meantime Mr Jurrah should be allowed to “get on with what he is good at”. He described him as “extremely talented” and “a wonderful person” who has never been in trouble before this.
Mr Jurrah will now  return to Melbourne and is not allowed to come back to the NT except for court appearances. Arraignment in the Supreme Court is set down for September 3. 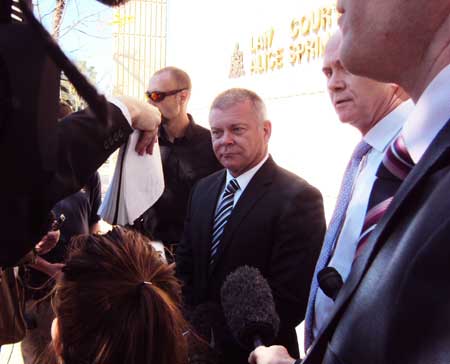 All three defence counsel had made submissions to Magistrate Bamber that there was no case to answer on some of the charges.
He prefaced his decision by pointing out the “low threshold” for “certainty” that is required in the committal process: “I have to consider which evidence at its highest is sufficient for a jury to find that a defendant could be convicted of a relevant charge.”
In regard to the ’cause serious harm’ charge against Liam Jurrah, he found that this level of certainty had been met. There was direct evidence from Basil Jurrah that he had been assaulted, which was supported by evidence from other witnesses.
Medical evidence also supported the fact that his injuries amounted to “serious harm”.
In relation  to the assault on Lemiah Woods, evidence by Ingrid White placed Liam Jurrah with Christopher Walker and Dennis Nelson Jnr coming into the yard [of House 1 at Little Sisters Town Camp] and trying, with two unnamed others, to hit him. Ms White’s evidence seemed to Mr Bamber sufficient to “raise common purpose” and was supported by evidence of Daphne White.
Ingrid White also gave direct evidence that Liam Jurrah had hit her on the head, causing her head to bleed, at the same time as Mr Fry had hit her on the other side with an axe.
In relation to the assault on Samuel White, Mr Bamber was of the view that there was sufficient evidence for it to be open to the jury that Liam Jurrah was part of a group acting together at the time Mr White was assaulted.
He did not go through all of the evidence in relation to each of the charges but commented generally that it seemed clear that the three co-accused were present at the time of the alleged assaults.
There would appear to be “two competing versions of what had happened”, however, at this stage there was clear evidence that the alleged victims had been struck and received injuries and that it would be open to a jury to find that they had been assaulted with various weapons and had suffered harm, and in the case of Basil Jurrah, serious harm.
There was no evidence put before him of an assault on Murray Woods and this charge was dropped.
.

Pictured, top: Liam Jurrah leaving court after he had been committed to stand trial. Ahead of him is Melbourne Football Club official Craig Lees. • Above right: Mr Jurrah’s senior defence counsel Jon Tippett QC (in the centre of the photo) speaks to media after the committal decision. To his left, junior counsel John McBride.