Mid-field placing for Chinese racers, and big win for Alice 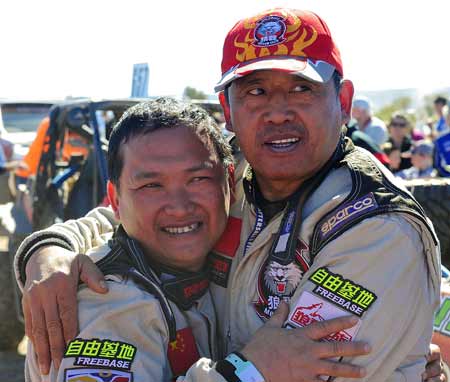 “Where is the dunny?”
This was the first question asked by Chinese Rally Champion Xiao Fa Guo when he arrived in Finke.
He had to use sign language because he doesn’t speak a word of English. He thought the Finke Desert Race would have a toilet stop half-way.
Alice Mayor Damien Ryan later explained, through an interpreter no doubt, that the local custom out bush is to have a dingo’s breakfast: a pee and a good look around.
A swag and billy tea were subsequent local discoveries for the driving champion.
Anyway, that’s how Alice photographer and businessman Steve Strike tells the story.
Mr Strike has an office in Guangzhou, southern China, and it was his brainchild to invite Mr Xiao and navigator Xie Jin Lin, plus a crew of around 15, to the Finke.
Their performance in the tough race was nothing short of outstanding, especially sitting on the wrong side (for they) of the car: driving a 6 litre Chev V8 truck after just 20 minutes of practice they came 29th outright and third in their class.
The vehicle was borrowed from Top End pollie Ross Bohlin, MLA for Drysdale.
Mr Xiao announced he wanted buy a top-of-the-line buggy and was told they go for around $450,000.
“No worries,” replied Mr Xiao – or whatever the Chinese equivalent is.
While the visitors finished mid-field, The Centre had a great victory: a TV crew for a Guangzhou sports channel with an audience of 100 million is tagging along, says Mr Strike, shooting not just the race but the competitors’ visits to the full gamut of local attractions – including the Reptile Centre, Flying Doctor, hot air ballooning and the School of the Air in town, and Glen Helen, Palm Valley, Hermannsburg and Ayers Rock Resort further afield. Photos STEVE STRIKE. L- R Navigator  46 yr old Xie Jin Lin and 52 yr old Driver Xiao Fa Guo from Gaungzhou in Southern China.  It was their first attempt at an international race and said they will be back next year with more experience.