A powerhouse of endeavour with a very human face 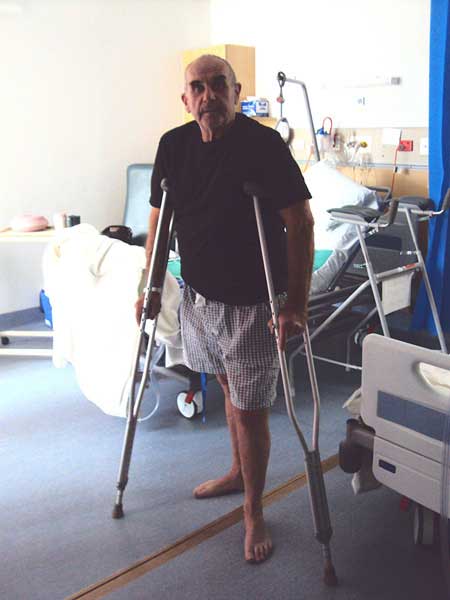 It’s a place where none of us wants to be.
Every day it fights battles of life and death.
It is one of the town’s biggest employers, a $150m a year operation of extreme complexity, drawing its highly skilled staff from all corners of the globe.
Last week I got a first-hand look at the Alice Springs hospital, getting a new left hip (that’s me pictured, getting back on my feet a couple of days later).
It was the small things that touched me most: “Hi, I’m Annie, I’ll be looking after you for the next few hours. Do you need anything? OK, if you need me, just ring the bell.”
To a person, the nursing staff start their shifts in this way. It takes around 30 seconds to say these or similar words, but they make all the difference: I wasn’t an object having things done to it. I was a person and I was with people who cared.
Stripped down to a gown, a plastic head cover and slippers, I walked into the operating theatre where I was going to surrender my body, my control over it, my consciousness – everything – to people I hardly knew, for three hours of my life.
The head of the team, Dr Bandula Palapitege, whom I’d seen three times before in the lead-up to the procedure, shook my hand and gave me his brilliant smile.
The anesthetist put his hand on my arm, saying: “We’ll look after you. Don’t worry.”
And a little later: “That’s the only pain you’ll feel.” A small prick as the needle went into my left hand.
Walking into the operating theatre was so much better than being wheeled in, which was how it was done 15 years ago when I had a minor procedure. As it was unnecessary, I found that demeaning.
I also remember on that occasion looking at a poster of Ayers Rock stuck to the ceiling above my face.
Last impressions this time ’round were immeasurably better suited for making me want to wake up again: beautiful nurses, one from Africa, two from Asia and one Anglo Aussie. (I’m sure the blokes looked great as well.)
Before it all went black I made a mental note to organise a photo of this team for this story, in their brand new operating theatre (much better than one of me).
As it turned out, that was a no-no, the hospital’s media spokeswoman made it clear to me in no uncertain terms: the Minister hadn’t officially opened the hospital extensions as yet and – being an election year – a photo out of turn just wouldn’t be right.
There is nothing usual about the Alice hospital. I saw it for the first time in late 1974.
My family and I had just arrived in The Alice and the massive building was nearing completion. It was much bigger than the hospital in any town of a comparable size.
The Alice’s population was around 15,000 and about 3000, tradies and laborers left town when the job was completed.
The size of the building was a puzzle: Do we really need something that big?
The answer, over the years, came to be: You bet.
It’s not just that the facility is catering for a vast region where illness is at alarming levels.
It is the variety of ill health: a doctor elsewhere might experience some exotic illnesses half a dozen times in his or her working life.
In Alice they’re likely to see several cases a week.
Crime related trauma – stabbings, broken bones, bashings – occur daily in Alice, giving it a caseload like war zone field hospital.
Nearly 70% of the patients are Aboriginal.
The hospital is often in the firing line. This was decidedly going to be a “good news” story, but we got no support from the NT Government’s inept and paranoid media machine.
I rang the hospital spokeswoman with some simple questions of fact.
She asked me to email them. I did. When I heard nothing from her more than 24 hours later I rang again. A person in Darwin answered. Does she have the answers? No. The Alice PR person has gone on holidays. I can ring her in three weeks’ time. Yeah, right.
A well informed source tells me the hospital has 185 beds and a staff of 950, and will from July 1 become part of the Central Australian hospital network, together with Tennant Creek, with a new board being formed now, replacing the present Alice Springs hospital board. (The Royal Darwin, Gove and Katherine Hospitals will form the Top End Network, soon to be joined by Palmerston.)
The high number of nominations for membership of the board, 29 for 10 positions, is a good sign of community interest.
A push to have just one network taking in all of the NT was rejected.
The source says the overseas recruiting strategy is preferable to using agency staff which is more expensive and less stable: staff from overseas are more likely to settle down in Alice.
Another objective has been the tightening up of the “credentialling” process after someone was hired as a doctor who did not have the qualifications (he was convicted and jailed).
In the big picture, the hospital is pushing ahead with its “quest for excellence” – providing more care in The Alice and sending fewer cases “south”.
And the very big picture is the more elusive task of reducing demand for its services: stemming the avalanche of misery, triggered mostly by violence and grog.
The source says what’s needed is the collaboration with the hospital of other organisations in the community, which absorb huge amounts of public money but apparently just don’t want to play.