Artist's meditation on the East MacDonnells


Henry Smith’s Slow Burn opened at Araluen Arts Centre last night. Smith has lived in The Centre for 16 years, exhibiting regularly both sculpture and two-dimensional work – paintings and drawings. His venture into abstraction is a new direction for him, or perhaps the next step in a decade-long direction. “There are so many realistic paintings out there already. I challenged myself to come up with something different, a fresh point of view. Each one would start as a landscape. Then I developed a composition of shapes, textures and patterns, using different palettes, depending on the seasons. Play and chance came into it quite a bit and in some cases I reworked a piece three or four times until I felt it was strong.”

Fellow artist and author ROD MOSS shared his thoughts about the work with the opening night audience:

Let me introduce this exhibition of Henry’s by paraphrasing something I wrote about his first show at Araluen a decade ago:

Those of us who have sought inspiration from living close to nature in Alice Springs can no longer make art reflecting its landscape without awareness of the political and spiritual connections that its indigenous custodians express in their representations. The proliferation of these has helped shape ecological debates. The great desert artists need no further endorsement. But there are those, like Henry who have sought political and spiritual connections themselves in relocating to this remarkable place.

For this landscape artist, that general statement remains pertinent. Though Henry has sought to re-invent his ‘picturing forth’ he is still himself. His interests, his curiosities, his devotions and sensibility continue on track. What might seem initially a radical change regards his approach is in essence a deepening of those intrinsic interests as he channels them into freer, more fantastic realms.

You might recall, if you are familiar with his drawings, watercolours and sculpture, how much he was seduced to the topographical qualities of this place. It is usual for artists coming from places very different in aspect to this arid zone, to attempt to understand what is presented to their eyes by describing the country in more or less literal ways. It’s a digestive process. Henry has continually determined to separate out the finer parts of his experience. Bearing in mind the cue given above regards indigenous art and his own spiritual aspirations, it should be no surprise that lengthy affinity with this place should result in the levels of abstraction we witness in the present body of work.

It takes courage to sacrifice literality’s assured path, its ready audience, especially when the hand and eye, as in Henry’s instance, work so happily together. Where to travel from there is a more open quest. Indeed, the prevalence of the palette knife and the presence of scumbled oils are physical options expressing a far bolder embrace.

An altered dynamic has occurred. One feels under the arrest of the artist’s composing, to be advancing into or over the landscape. It no longer sits away from us. Our spectatorship before ‘views’ is surmounted by the need to draw near, to be intimate.

I don’t think it’s too extravagant to say that Henry’s mark-making might have parallels with indigenous sign-making as we swoop across vistas of quilted hues and dip into the pockets and groins of his beloved Eastern MacDonnell ranges to snatch a trace of distant herbage or to be dealt up close with the thud of some rock.

This spatial transformation is accompanied by swathes of colour at times apparitional, at others retaining their literal links. We can share his excitement as he probes these inventive juxtapositions which invite us to look and feel anew about our country.

In keeping with this interiorizing of our landscape, that ‘slow burn’ of the show’s title, I suggest, describes the action that has evolved through Henry’s meditations. 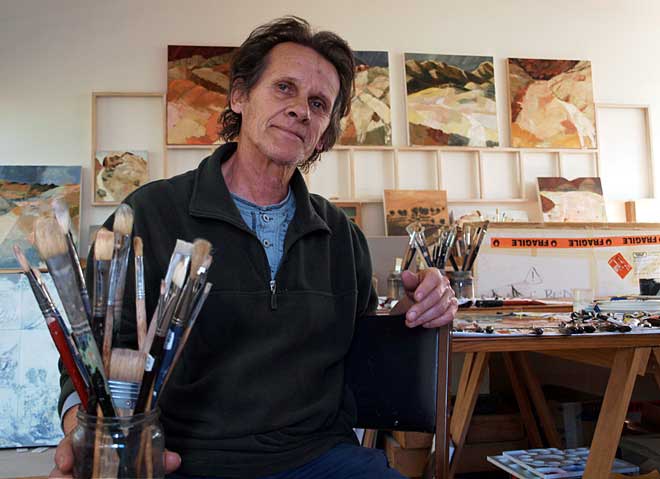 The artist in his studio. Photo courtesy Charles Darwin University, Alice Springs campus, where Smith works  as a lecturer in Visual Arts.

Henry Smith: The land is a mirror of life’s struggle.

In an age of cool, it is not often, in a gallery setting, that we encounter undisguised either expressions of wonder or of personal suffering, both of which are prominent in Henry Smith’s fist solo exhibition in Alice Springs. Opening at Araluen this Friday, Odyssey of Wonder is a show of ink and pastel drawings, a surprise in itself, as Smith arrived in Alice with a solid reputation as a sculptor, with some 20 years of freelance commissions behind him.

Like so many others, Smith fell in love with the landscape of the Centre when he first came for a visit in 1978. He was not able to return until 1997 when he took up a position in the art department at Centralian College, teaching sculpture. In his free time he began a long exploration of country and feeling, traced in these works on paper.

Again like so many others, Smith talks about the special “presence” of the landscape. He sees in it signs of “grace, struggle, survival, desperation”, parallel to the human condition.

Why the exploration led him to drawing rather than sculpture is something he can’t fully explain, but he says he can “cover more ground” with drawing, “put down more, explore more”.

“Sculpture is often two per cent inspiration, 98 per cent hard work,” says Smith.”And at a certain point you become locked into your original idea, it’s hard to change, whereas with drawing you can work through changing ideas and feelings very quickly.”

Yet most of what we’ll see in the gallery is the product of many hours’ work. In the field, Smith mostly makes thumbnail sketches and carefully annotated strip drawings. He may spend a whole day just noting how different forms in a landscape take shape as the light changes.

The large drawings are generally worked up in his living room, which serves as his studio and where I first saw the lovingly evoked “Sacred Place”, a two metre wide charcoal drawing of a valley in the Eastern MacDonnells. Smith opens this space before the viewer, as if it’s at our feet; renders its old textures in delicate detail; infuses it with light.

Interestingly, this drawing came early in the chronology of exploration. Later personal experiences, states of mind and artistic experimentation took Smith off in other directions. Two of the self-portraits show the artist full of anguish, consoled only by the land, particularly its trees. Then, it would seem, Smith emerged from this dark hour, experiencing a transfiguring wonder at nature’s strength and beauty. (It is not surprising to learn that he has practised meditation for some 20 years.)

Such experiences are profound, but are perhaps the most difficult to render with profundity: Smith’s metaphors in this phase of work are somewhat literal; they more describe his vision than enter into it. There is at least one other significant strand of his work that should be mentioned: drawings which blend a Western way of seeing the land – as elevating, awe-inspiring – with a suggested other possibility, playing with the “building blocks” of an Aboriginal visual representation – dots, and repeated lines, not symbols. This has the interesting effect in some instances of cutting the land loose, which may be where Smith is heading, having the courage to make the journey, accepting its ever-elusive goals.