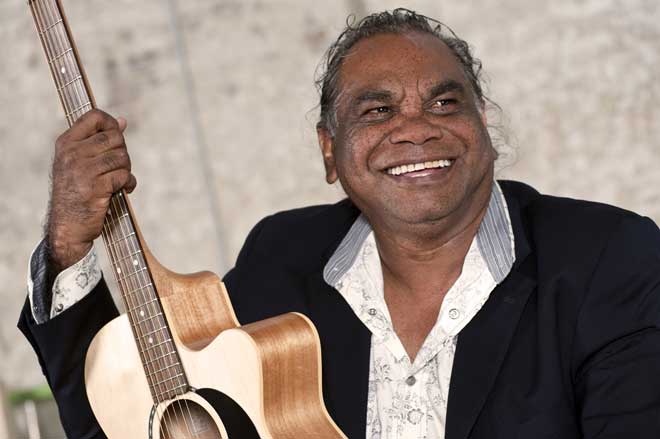 Warren H Williams – singer, musician and song writer from Hermannsburg in Central Australia – has won the $50,000 Red Ochre Award for his outstanding contribution to Indigenous arts. This is Australia’s highest peer-assessed award for an Indigenous artist presented by The Australia Council’s Aboriginal and Torres Strait Islander Arts Board. 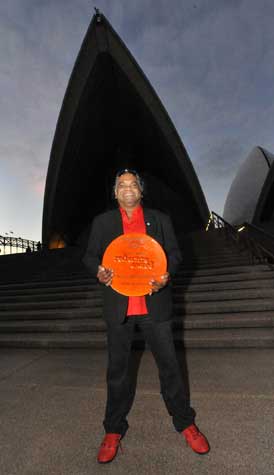 The award was made today at the 5th National Indigenous Arts Awards, held at the Sydney Opera House.
While known widely as a country musician, Warren H brings together many threads of the contemporary Australian sound, merging Aboriginal music with country and rock, bringing these musical genres onto a world stage.
“Warren plays a vital and unique role in the Australian music industry,” says Lee-Ann Buckskin, who was appointed Chair of the Australia Council ATSIA Board this week. “He’s a quiet achiever who not only shows young people the way to have a successful career in the music industry, but also dedicates his energy to issues of health, Aboriginal rights and the environment.
“Whenever he talks, people listen; and when he plays, whether it’s in the laneways of Melbourne, in youth centres in Alice Springs, or live on national television – crowds are mesmerised by his music.”
The turning point for Warren H’s career came when he joined with John Williamson to sing  ‘Raining on the Rock’ – the duet became an anthem for reconciliation and one of Australia’s most recognised country songs.
Warren H’s achievements have been recognised through many awards including NAIDOC Artist of the Year in 2006, the Country Music Centenary Medal from the Country Music Association of Australia in 2004, and a Golden Guitar with John Williamson and Amos Morris for ‘Australia Is Another Word For Free’ in 2009.
To date, Warren H has released nine albums. His latest offering is a move away from country music to a language album, Winanjjara, or ‘song man’ in Warumungu language. It was recorded with the song men of Tennant Creek and sung in two of his maternal ancestors’ languages: Warumungu and Western Aranda.
With his Red Ochre prize money, he plans to go to the US country music capital of Nashville to create an album.
“If there is anyone who deserves to be acknowledged for his integrity, commitment and compassion towards his fellow Aboriginal artists and community, it is Warren H Williams,” says Lee-Ann.
Nakkiah Lui, a playwright from Western Sydney won the inaugural $20,000 Dreaming Award, for a young and emerging Indigenous artist.
Two fellowships of $90,000 over two years were also announced, one going to musician Geoffrey Gurrumul Yunupingu and the other to ‘digital native’, Jenny Fraser.

The award comes just a week after the finale of the Australian tour of Namatjira, a theatre production by Big hARTremembering the life and times of the acclaimed Western Arrernte artist, Albert Namatjira, and coincides with the current exhibition of contemporary Hermannsburg School watercolour artists.