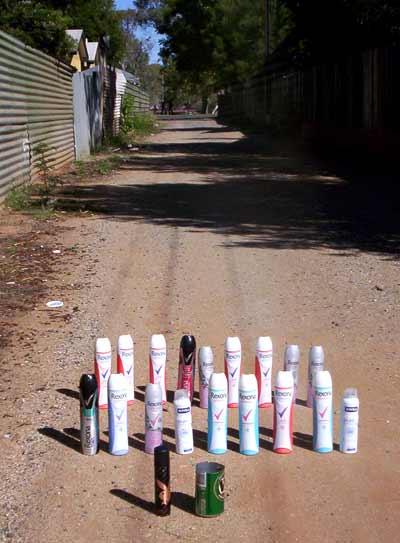 Some people in this town seem to be on a permanent quest to find new ways to hurt themselves.
As sniffable fuel and paints have been made harder to come by, anti-perspirant sprays seem to be the latest craze.
I collected these cans in the laneway at the rear of my home in the Old Eastside, in the space of a few days during last week.
The back row of spray cans appeared in just one day, and I came across a young Aboriginal girl sitting by the fence as she was sniffing the last one.
She didn’t seem to be affected much but perhaps she hadn’t been alone sniffing all of them.
The remainder I collected over the next three days. The small “Playboy” spray can and the cut-off VB can I picked up in the Todd River. This ties in with Blair McFarland’s alert over this issue last week when about 100 of these spray cans were picked up, mainly in the vicinity of K-Mart.
This sniffing outbreak seems to be over, I’ve not come across any more spray cans this week.

Facebook
Twitter
Pinterest
WhatsApp
Previous articleCourtroom Two: the day after the long weekend before
Next articleGrog stats may be useless as they do not include online and mail orders