Power struggle on Town Council: a sign of things to come? 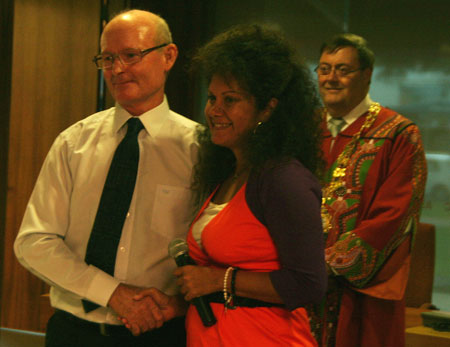 The so-called Gang of Four were not going to accept the consolation prize. Councillor Liz Martin had said on this site that she would be nominating Cr Brendan Heenan for the role of Alice Springs Deputy Mayor and that runner-up in the mayoral race, Cr Steve Brown, would be ideally suited to chair the Technical Services Committee. Once Cr Heenan was elected by the predicted five / four split in votes, Cr Brown and his supporters, Crs Geoff Booth, Dave Douglas and Eli Melky, were ready.
The four proceeded to refuse all nominations to chair the standing committees in what was clearly a coordinated boycott.
Council has three standing committees – Finance, Corporate and Community Services, and Technical Services –  through which is channelled all its business. All councillors are members and attend the meetings which  take place a fortnight ahead of the formal monthly Ordinary Meeting. There are no standing orders for committee meetings and they are normally the place for more robust debate and thorough discussion of issues. Ordinary Meetings are normally chaired by the Mayor while committee meetings are chaired by councillors elected to the position.
When Mayor Ryan called for nominations to chair the Finance Committee, Cr Booth nominated Cr Chansey Paech. New to council and its youngest member, Cr Paech seemed surprised but chuffed and accepted the nomination. Cr Jade Kudrenko, also new and youthful, tried to head off the manoeuvre, nominating Cr Booth, an experienced businessman. He declined, so Cr Paech was elected.
Cr Paech then nominated Cr Liz Martin to chair the Corporate and Community Services Committee. She accepted and was declared elected.
Next, Cr Eli Melky nominated Cr Kudrenko to chair the Technical Services Committee. She was clearly startled. If the five who supported Cr 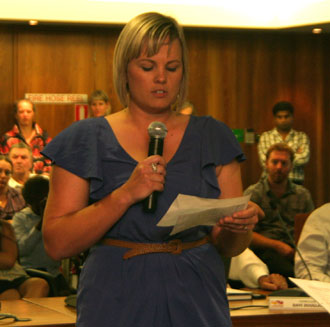 Heenan to become Deputy Mayor had decided on this in advance, they hadn’t counted on such a reaction from the ‘Gang of Four’. Cr Kudrenko declined the nomination.
Cr Brendan Heenan then nominated Cr Brown, an electrician and builder who would certainly be on top of the issues of this committee. Cr Brown declined. Cr Martin had had her hand up to also nominate Cr Brown.
Cr Heenan then nominated Cr Melky. He declined. Tension was mounting. Cr Melky attempted to lighten the atmosphere: “We love you, Greg!” he told the Director of Technical Services, Greg Buxton.
Cr Martin then asked CEO Rex Mooney whether the same councillor could chair two committees, obviously thinking that she might have to take on Tech Serves as well.
Mr Mooney said that would be “very unusual”. He tried to encourage further nominations, saying that not a lot was required in the role between council meetings. But workload was clearly not the issue.
Mayor Damien Ryan called for nominations.
Cr Booth nominated the Deputy Mayor Heenan.
Cr Heenan said he would like to see a new member of council put their hand up; the role would be a good way of getting into council business. He declined the nomination, the fourth to do so.
Cr Paech nominated Cr Dave Douglas, who declined.
Cr Martin meanwhile was having a quiet word with Cr Kudrenko, who was seated next to her. Cr Martin then asked whether it would be possible to withdraw from Corporate and Community Services, to nominate Cr Kudrenko for that position and then to nominate herself for Tech Services.
She got the nod, duly nominated Cr Kudrenko, seconded by Cr Heenan. Cr Kudrenko accepted although her raised eyebrows suggested that she still felt taken aback by this tactical game playing.
Mayor Ryan then nominated Cr Martin for Technical Services which she accepted.
During the minute’s break that followed, there was a leaden atmosphere in the chamber. After the fine sentiments expressed by all councillors during the swearing-in ceremony, this procedure had felt like a fit of pique at best, outright bullying at worst. It did not augur well for a cooperative approach to council business.
The business of the Ordinary Meeting concluded, it was now time for the Corporate and Community Services Committee to convene. Cr Kudrenko stepped into the chair. She kept her head, deferred to CEO Rex Mooney whenever she was unsure and managed the next lot of business very well, all things considered.
On paper it looked innocuous enough, a matter of finding councillor representatives to sit on the very many other committees, both internal and external, where they are required. 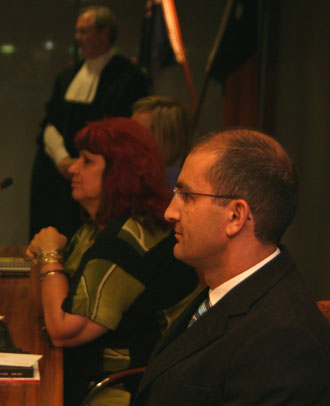 It mostly went smoothly but for a few key committees there was again a power struggle.
The first was over representation on the Town Council and Tangentyere Council steering committee. Two councillors were required in addition to the Mayor. Cr Paech nominated himself (seconded Cr Martin); Cr Martin nominated Cr Kudrenko (seconded Cr Paech); then Cr Melky nominated himself (seconded Cr Brown).
It would have to go to a vote. This must be unusual as there was no clear voting procedure to follow. After a bit of to-ing and fro-ing, Mr Mooney suggested that the rest of the business continue, while officers put their heads together about how to conduct the vote.
The Town Council and Lhere Artepe Aboriginal Corporation [the native title holders] partnership committee went the same way. It also requires two councillor representatives and the Mayor.
Cr Booth nominated Cr Brown; Cr Melky nominated himself; Cr Martin nominated Cr Paech; Cr Brown nominated Cr Booth; Cr Paech nominated Cr Kudrenko.
A number of other committees were also heading for a vote, including the Todd Mall  Redevelopment Project team, for which four councillors were being sought and five nominated. Mayor Ryan headed off possible rancour over this one by suggesting that all five be allowed a seat on the team. This was unanimously agreed to.
What officers decided on as the way to take a vote was unfortunate as it did not allow a clear indication of the level of support for each nominee and discontent over this will possibly fester. There was a show of hands for candidates in order of their nomination, so it ended up being first in, best dressed. (In the course of the night, I had been reminded more than once of quiz shows, with councillors very keen to hit their buttons first – when they do a red light shows on their microphones, attracting the attention of the chair.)
For the Tangentyere committee Crs Paech and Kudrenko had been nominated first and each got five votes, so Cr Melky’s nomination did not go to the vote. He muttered something about a “block” to which Cr Martin took exception – fair enough really, given the coordinated tactics displayed earlier in the evening. Cr Martin asked Mr Mooney to give some direction to councillors about “smart comments” being made in her ear. She said she had had to put up with it for the last 12 months but was not going to “at all” in this term.
Mr Mooney asked Cr Melky, who sits next to Cr Martin and did during the last term, to “kindly refrain”.
The five / four split was then broken for the Lhere Artepe committee vote. Cr Brown won six votes, including those of Cr Martin and Mayor Ryan, and was duly elected. Cr Melky only got four votes, so this time the third nomination, of Cr Paech, was put to the vote. He got five votes and was thus elected.
Further tension was avoided by various nominees to other committees withdrawing before a vote was taken. The exception was for the Alice Springs Population Intelligence Working Group, for which Cr Kudrenko self-nominated and Cr Heenan nominated Cr Brown. Cr Brown won with five votes, including Mayor Ryan’s.
These votes where Mayor Ryan and Cr Martin voted with the “Gang of Four” avert for the time being the possibility of speaking of a Gang of Five. The four never broke ranks.

Pictured, from top: A happy Cr Steve Brown with Local Government Minister Malarndirri McCarthy after his swearing-in. The good cheer didn’t last. • The Greens’ Cr Jade Kudrenko pledges her service. She is proud of her party affiliation but said she will work for all of Alice Springs • Cr Eli Melky, seated next to Cr Liz Martin: there may not have been fireworks but there was definitely irritation. • Below: Cr Dave Douglas pledges his service. The ceremony was well-attended but most left  before council got down to business.