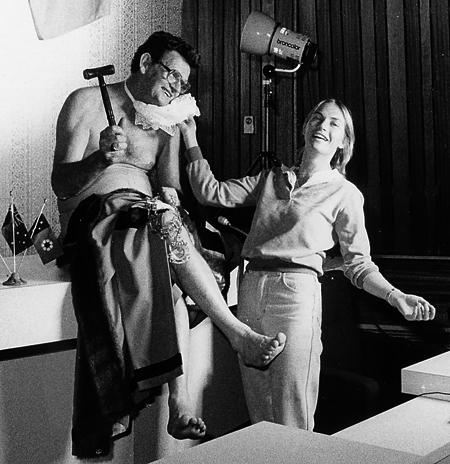 Mayor Damien Ryan’s triumph over four rivals who had run a concerted effort to unseat him is a considerable achievement, especially in light of the fact that he is the only local government leader of all the NT’s major population centres to have been returned to office following the recent council elections.
Ryan’s victory maintains the pattern of every Alice Springs mayor since 1977 winning at least two successive elections; but it’s also the fourth occasion where the result has been determined by preference distribution.
The earlier occasions were George Smith in 1977, Fran Kilgariff in 2000, and Ryan in 2008. Thus Ryan’s recent victory is unique as this marks the first time an incumbent mayor has had to rely on preferences to cross the line.
Setting aside this distinction, there are marked similarities between Ryan and former Mayor George Smith. Both were small businessmen and both were elected mayors without prior involvement on the town council. Neither had stood for alderman, too.
Similarly, each faced stiff competition in their first campaigns from prominent sitting aldermen. In 2008 Damien Ryan’s most serious rival was Alderman Murray Stewart, out of a total field of five candidates vying for the office.
Ryan initially polled 39.7 per cent of the primary vote but won comfortably with 67 per cent after distribution of preferences. His nearest rival Stewart had won 19.5 per cent of first preference votes for mayor, followed by Alderman Jane Clark with 15 per cent.
Both challengers easily retained their council seats although the final results for the town council had to wait for a recount of the votes for aldermen.
In 1977 George Smith also competed for mayor from a field of five candidates. Smith’s greatest rival was Alderman Luigi “Gino” Marinucci, followed by newcomer Di Byrnes.
Smith maintained a narrow lead throughout the count, initially just ahead of Byrnes until preferences were distributed which then placed Marinucci second.
The final result was very tight, with Smith only 43 votes ahead of Marinucci. There was also a recount of votes except on this occasion it was for the mayor’s position.
Just as Murray Stewart and Jane Clark benefited from the mayoral race in 2008 to win early positions as aldermen, so did Gino Marinucci and Di Byrnes in 1977.
Remarkably, in the town council elections that followed in 1980, in which George Smith became the first incumbent mayor to stand for re-election, there are also several uncanny resemblances to the recent campaign that Ryan has just won.
Both incumbent mayors faced criticism of their performance and stiff competition from four rivals.
In 2012 a sitting alderman, Eli Melky, was one of the four to challenge Ryan; in 1980 it was (by then) former Alderman Gino Marinucci who again sought to challenge Smith.
In 2012 the most prominent opponent of Damien Ryan was Steve Brown, who had previously run for alderman in 2008 and just missed out being elected. Brown was a chairman of the CLP’s Alice Springs Branch but later resigned from the party.
In 1980 George Smith’s most serious opponent was lawyer John Reeves, who had polled second in a by-election in 1979 (triggered by the resignation of Alderman Gino Marinucci). Reeves was a chairman of the ALP’s Alice Springs Branch but was later to have his differences with his party, too.
In 2012 Damien Ryan was also challenged by tyre sales businessman Dave Douglas; in 1980 George Smith was challenged by car sales businessman Wayne Thomas.
Finally, the rank outside fourth challengers for mayor was Samih Habib Bitar and Dawn Riley for the elections of 2012 and 1980 respectively.
Variations of these parallel histories emerge when comparing the results of the 2012 and 1980 campaigns.
In 2012 all four mayoral candidates also sought election as councillors (formerly aldermen). Three of them – Brown, Melky and Douglas – were successful; Habib Bitar was not.
In 1980 mayoral candidate Gino Marinucci did not seek to run as alderman (like Murray Stewart in 2012) but the other three did. Wayne Thomas was successful but Dawn Riley missed out.
John Reeves’ case is a special mention – he polled very high with first preference votes; but the 1980 elections for aldermen were the first to be determined by exhaustive distribution of preferences, and Reeves became the new “block voting” system’s first major casualty – he missed out.
However, he subsequently won a by-election in 1981 to become an alderman of the ASTC.
Another variation of the results between 1980 and 2012 is that George Smith won an absolute majority for re-election as mayor whereas Damien Ryan did not. 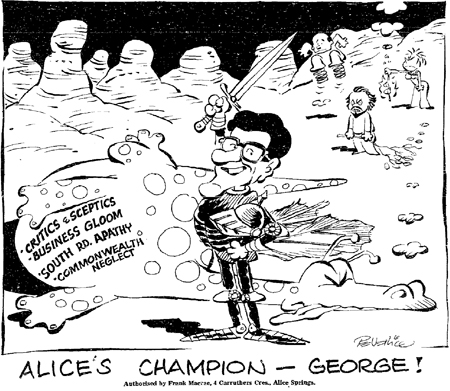 This was important as Smith’s first term performance (like that of Damien Ryan) had attracted heavy criticism. At the time returned Alderman John Jenkins was quoted “that as the general competence and overall performance of the previous council was called into question by several candidates during their election campaign, it was significant that the Mayor was re-elected with an absolute majority” (Centralian Advocate, 29 May 1980).
Smith’s election victory at this juncture presages that of Damien Ryan’s predecessor, Fran Kilgariff. As outlined earlier, in 1977 George Smith was one of five candidates running for mayor to replace retiring Mayor Tony Greatorex. Smith won with a narrow majority of 43 votes after distribution of preferences.
In 2000 a similar situation arose upon the retirement of Mayor Andy McNeill. Once again five candidates were running for mayor.
The front-runners on this occasion were Jenny Mostran, Fran Kilgariff and Geoff Miers, all aldermen of the previous council.
Mostran, with 34 per cent of the primary count, had a healthy margin of 724 votes ahead of her nearest rival Fran Kilgariff (27 per cent), with Geoff Miers trailing a respectable third place (23 per cent).
However, Mostran’s margin proved insufficient after the distribution of preferences enabled Kilgariff to come from behind to win office with a majority of just nine votes, the smallest in the town council’s history.
(In light of this experience the speculation that Damien Ryan, with his much higher primary count and wider percentage gap to his nearest rival Steve Brown, was at risk of losing after the distribution of preferences was never realistic. However, Ryan’s overall majority after distribution of preferences in 2012 is 56 per cent, well down from his 2008 result of 67 per cent).
As George Smith had done in 1980, Fran Kilgariff successfully ran for a second term as mayor in 2004, winning with an absolute majority. The similarity of the percentage figures is truly astounding – George Smith won with 50.6 per cent of first preference votes, Kilgariff won with 50.4 per cent.
The extraordinary parallels provide a strong temptation to make predictions about the immediate future of the new council; and if history does provide any guide then the portents are grim.
While the controversies of the recent council are still fresh in our minds and leading some to claim this year’s town council election campaign was the most divisive in the history of the ASTC, history shows otherwise.
The second term of George Smith’s mayoralty was characterized by intense dissension and conflict within the council; and by the time of the next election in 1984 Smith had already long resigned as mayor and left town.
When the new council of 1984 was elected, no alderman from the council of 1980 was present (with the exception of George Smith’s successor, Mayor Leslie Oldfield).
It’s to be hoped the incoming mayor and councillors of 2012 will be mindful of this dark episode and seek to avoid a repetition of history.
PHOTO: Mayor George Smith with photographer Di Calder posing for her calendar featuring prominent locals in the nude – well, almost. Photo by CARMEL SEARS.
CARTOON: “St. George slays the dragon” by BUTCH PEVERILL published for George Smith’s campaign for re-election as Mayor during the town council elections of 1980. Most of Smith’s campaign rivals are depicted in the background; they are John Reeves holding a tree branch (a reference to his chairmanship of the local Australian Conservation Foundation branch), feminist Dawn Riley burning a bra, and Wayne Thomas, a prominent car salesman, bouncing on shock absorber springs. One rival, Gino Marinucci, is missing from the line-up.