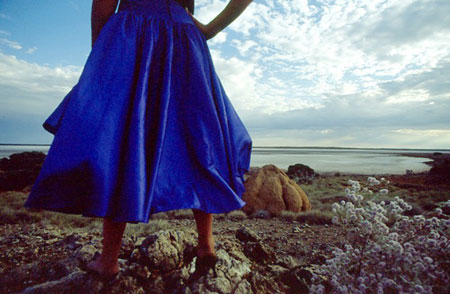 When Australian novelist Kate Grenville opened Obscured by Light, a collaborative exhibition by Pamela Lofts and Kim Mahood showing at Araluen, she referred to the landscape that they have made their stage as the “scary stuff”. It was lightly said but nonetheless an interesting echo of the long held popular conception of the Australian interior as a great and threatening unknown.

A merit of the Lofts and Mahood show is its playfulness and humour in counterbalance to this kind of apprehension, even if there is mostly a comically satiric flavour to their antics in the Tanami Desert. These are mostly enacted by one Violet Sunset (performed by Mahood), a parody of the feminine in gorgeous cocktail frock and kitten heels, created and directed by Lofts.

Sometimes though, Mahood the artist and child of the desert peeps through and this sets quite a different emotional tone for the work. This happens partly in the images such as the pair showing twinned, finely sculpted shapes – reminiscent of boats, seed pods, coffins – scooped out of the earth, one of them containing a naked female form (her); partly through fragments of text from her pen, such as: “She would have found it impossible to imagine as a child that one could love a place as she loved this one, and still not be able to remain. That failure has rendered her homeless.” 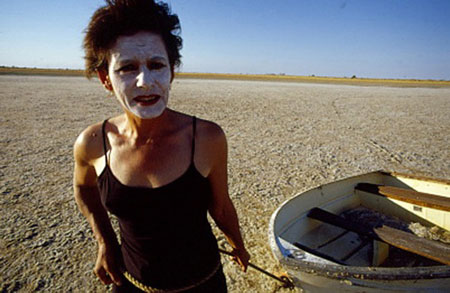 Even if we did not know the facts of Mahood’s biography – that she grew up on a cattle station in the Tanami and has written about the experience in an elegiac memoir, Craft for a Dry Lake – this strand of the work importantly suggests the possibility of the desert as an inhabited place, even if it means living close to absence, death and abandonment, a theme of many of the images.

Woven into the loosely suggested narrative – made up of 53 images and almost as many text fragments – is the elusive figure of The Inland Sea. The preoccupation of early explorers has a contemporary form, suggests the work: “The people in the city where she lives believe that answers are to be found in the desert, although none of them have been there. Although she is not confident that this is true, Violet decides that it is worth finding out.”

There’s nothing like actually being there, the work contends, with all the risks of madness, loneliness, fear, and hardship as well as the rewards of stillness, spaciousness, beauty and joy. “Blue as an eye, curling round the rim of the world” – here is their  ‘inland sea’, an ephemeral lake. “She found it in the end just by being there at the right time.” A fundamental lesson of desert living.

Lofts’ photographic images are as gorgeous as the frock – saturated colour, high gloss – and finely attuned to both the drama of the landscape and the story-telling nature of the enterprise. Lofts excels at work in this vein: viewers may recall her wonderfully evocative 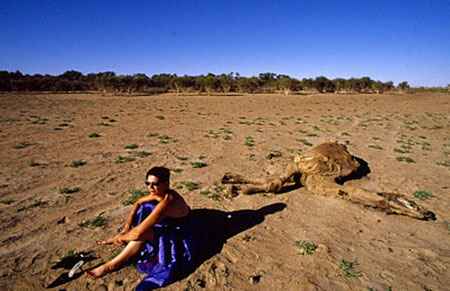 Country Love series, and more recently, the haunting Requiem for Another.

The Obscured by Light series is edited from many hundreds of photographs taken during the artists’ joint travels in the Tanami over 15 years. It is a treat, both entertaining and thought-provoking, to be taken on this condensed journey with them.