One morning this week I arrived to work to find the entire mall off power. This meant that we couldn’t roll up the electronic security shutters and open for trade. It also meant that I could have stayed in bed an extra half hour.
Following last week’s eating locally challenge it was good to be challenged in anther way that brought to light the incredible dependency we have on electricity. I guess we all know that in theory without power things come to a grinding halt pretty quickly. I mean we didn’t have any candles at the café, so to even be able to see inside we needed to buy some, but none of the supermarkets were able to trade either.
My boss had been running fingers crossed on empty the last few days and thought she had better not continue to tempt running out of fuel. She left her car at the servo in the end, as they couldn’t trade either.
As I sat out the front of Soma waiting for the whir of the electrics to resume I wondered what sort of back up security systems the banks have and what does Alice Solar City really mean? I wondered about the increasing mechanization of things, with so much electronic stuff beyond the manual manipulations of most people.
In what I found to be a great show of irony the Australian Photovoltaic Association’s website was experiencing technical difficulties and I couldn’t bring up the report on impacts for the grid in Alice Springs as PV system installations continue to grow. 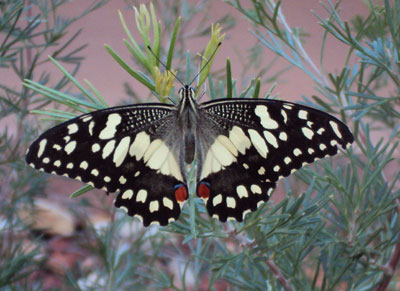 Anyway, for a while now I have been following the plight of bees: numbers are in rapid decline and very few countries  are left with healthy bee populations. The incorporation of bacterial disease, Bacill Thuringiensis (BT), into genetically modified corn by companies such as as Monsanto has been linked to Colony Collapse Disorder. The BT is intended to kill any insects that eat the crop. In the case of bees however, contact with BT pollen has a delayed side effect, weakening the bees’ immune system. Bees start not being able to survive regular run-ins with mites and parasites. The short story is the resulting abandonment of hives. At the moment GM corn is not grown in Australia though I have heard rumblings about changes to legislation to allow greater export opportunities for GMO products.
I was going to take a snazzy macro shot of a bee in my garden but surprisingly (no sarcasm intended, I do have a flourishing garden) I couldn’t find one. All is not lost though what with the Robo-Bee or Micro Air Vehicle. Geared for pollinating, espionage and dropping nano-technology sized bombs, the Robo-Bee is another example of the science’s mastery over our natural environment.  Further along this demented garden path, I saw a solar-powered butterfly at a local nursery, life sized and realistic! Online they are advertised as, “a must and will bring your garden to life!” Really? Maybe, but I’m pretty sure that without the real deal pollinator squads, the feeding of seven billion people is set to become an even greater challenge.
It’s really no wonder that I am passionate about food from dirt to dish – it’s an area of bottomless interest and intrigue with good guys, bad guys, cloak and dagger and smoke in mirrors type of goings-on. I sometimes feel a little dizzy at the spectacle, particularly around something that intuitively ought to be so much simpler. I mean, Robo-Bees and solar-powered plastic butterflies? I guess though that even historically the meeting of basic needs (and rights) hasn’t always been at all straightforward either.
Photo: Solar-powered plastic butterflies or the real thing? I know what I’d choose.