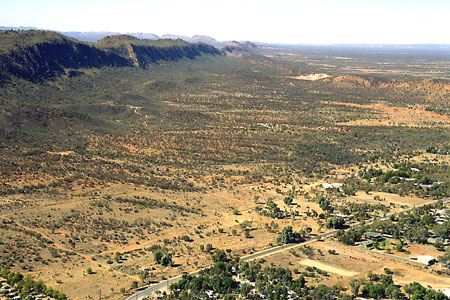 A deal to develop 260 residential blocks, a retirement village and shops just outside The Gap is at a stalemate.
The picturesque land, 150 hectares on the southern flank of the ranges, off Ragonesi Road, is owned by Ron Sterry.
The project has been limping along for some 10 years with some of the roads, sewerage and storm water drains in place, but no work in progress at present.
Last year a consortium of local and interstate interests made an offer to Mr Sterry with the intention of starting work immediately towards the completion of the development.
The head of the consortium, David Cantwell, who co-owns a project management and certifying business in Alice Springs, says the offer is worth $15m.
Contracts were drawn up following an undertaking by Mr Sterry to proceed.
However, Mr Sterry pulled out of the deal at the “very last moment”.
Mr Cantwell says the offer had been to assume Mr Sterry’s current obligations, and then pay him a percentage of the value of each building upon completion.
Mr Sterry says: “I rejected the offer because I felt it was not it was not good enough. Contracts were drawn up only in draft form.” 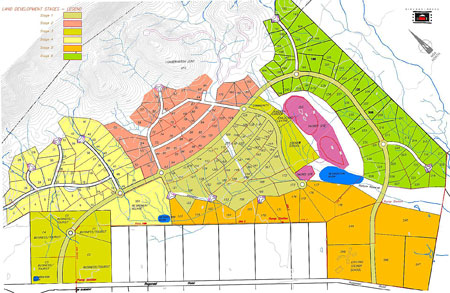 Mr Cantwell says engineering drawings as well as most of the permissions from the government and service authorities had already been obtained by the consortium, at considerable cost, when the negotiations stalled in May last year.
The project was conceived at the height of shortage of residential land in Alice Springs.
PICTURES: Top left – The site from the air. Above right: Planned lay-out and staging of the development. The green square at bottom left of the plan is for use by businesses, tourism and a retirement village. The white rectangles bottom centre are rural residential blocks not part of the Sterry development. To the right of these is the Steiner School. The blue areas are retardation basins, and the mauve ones, sacred sites. The stages of residential development are (from 1 to 6) light green, pink, darker green, yellow, orange and dark green.