Home Issue 8 Unseating an incumbent: not easy but not impossible
Issue 8Volume 19

Unseating an incumbent: not easy but not impossible 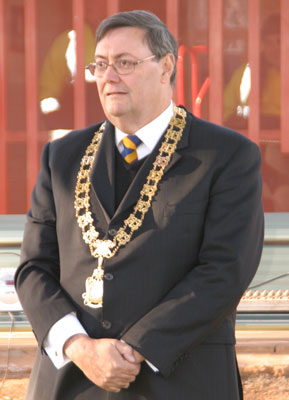 In 1992 former Assistant Commissioner of the NT Police Andy McNeill was one of two challengers  against incumbent Mayor of Alice Springs, Leslie Oldfield (the other was Alderman Harvey Millard). This was a formidable task as Oldfield had won a by-election for mayor in April 1983 and easily retained the office in the council elections of 1984 and ’88. She was the town’s first female mayor and by 1992 was by far the longest serving in that role (a record she still holds).
However, Oldfield’s popularity as mayor had not translated into support for her when she ran as an independent candidate in the NT election campaign of October 1990, when she had stood against her former boss Roger Vale, the CLP’s immensely popular Member for Braitling. Vale trounced Oldfield but clearly did not forgive her for that sleight, one more in a list of grievances the CLP had against Oldfield, long a thorn in the side of the NT Government.
Andy McNeill always stressed he was politically independent in his tilt for mayor; nevertheless the full weight of the then mighty local CLP party machine (of which I was then a member), supporters and affiliates was brought to bear to assist in his campaign to oust Oldfield. I know this because Mr McNeill had asked me to join his campaign committee and I’d accepted.
By 1992 the CLP was on the rebound after several years of instability and infighting. The party had staved off defeat in the NT elections of 1990, and the race for mayor in Alice Springs provided the next opportunity to consolidate its strength in its old bastion of power.
The campaign went like clockwork. On Saturday, May 30, 1992, Andy McNeill won an absolute majority of 52 per cent of votes cast; and Leslie Oldfield suffered the ignominy of becoming the town’s first incumbent mayor to be defeated at the polls.
In the 41 year history of the Alice Springs Town Council, the 1992 election campaign is the only occasion an incumbent mayor has been defeated. It therefore deserves some analysis as to why this has remained a unique event.
It is a truism of politics that oppositions don’t win elections, rather governments lose them. This holds true for the mayoral race in 1992. Leslie Oldfield had prevaricated for a time on whether to run for mayor again, before finally deciding to do so.

This uncertainty was followed by a crucial error of judgment, in which Oldfield’s campaign focused almost exclusively on her impressive track record in local government (she had been an alderman before becoming mayor) but offered no new policies.
This was a major tactical blunder at a time of national economic recession (which hit the Alice hard), a slump in tourism, endless controversy over rampant alcohol abuse, litter and vandalism, crime and anti-social activities (including youth crime); and extensive debate about the town’s future direction of growth and town planning, building height limits, revitalization of the town’s CBD, especially Todd Mall, and including the Todd River. (Incidentally, who remembers that in late 1992 the Town Council formally decided to re-open the north end of Todd Mall from the Parsons Street intersection to two-way traffic?)
Alice Springs was as much a focus of national media attention for all the wrong reasons in the early 1990s as it is today.
McNeill’s principal campaign slogan “Time for Change”, combined with “Let’s make council work”, clearly resonated with an increasingly exasperated voting public. He emphasized his qualities as “A Family Man” (Oldfield was divorced), “A Skilled Administrator; A People’s Man” and promised to be “A Full Time Mayor Dedicated to Action” with an “Open Door Policy” and would “Work for the Alice – not talk”.
Tourism, bike paths, litter control, pet by-laws and improved financial management were all key planks of McNeill’s election policy platform.

McNEILL FOCUSED ON THE FUTURE

The clear difference of the two major campaigns was that McNeill focused on the future while Oldfield relied on her past. Whether McNeill succeeded in implementing his vision is at best a moot point; however, he was untroubled in the subsequent council election campaign of 1996, where he increased his absolute majority against three challengers; and he retired from office at the elections of 2000 still clearly popular with many people.
McNeill was succeeded by Alderman Fran Kilgariff, who also was the mayor of Alice Springs for two full terms when she retired in 2008.
So what of the present? While most issues that the Town Council is grappling with today are virtually no different from those of at least three decades ago (for example, the current CBD revitalization is at least the fourth such scheme in this time), the current mayor Damien Ryan has only served one term and therefore still has time on his side.
I detect no major groundswell of opinion against him and (like McNeill but unlike either Oldfield or Kilgariff) he has no ambition to enter Territory politics – this counts in his favour.
Ryan clearly prefers consensus over conflict, and to some this is seen as being too weak to adequately represent the interests of Alice Springs; however, he is usually approachable and responsive.
By contrast, Steve Brown is a much more controversial public figure. Forthright and pugnacious, no one is in any doubt where they stand in relation to his views on many issues, consequently he polarizes the public. It remains to be seen whether he can generate sufficient support to upset Ryan in the mayoral contest but the portents of history strongly suggest this is highly unlikely.
However, it has been a common strategy employed by many candidates over the years to run simultaneously for mayor and alderman (this time it will be councilor); and this is a good means of gaining a higher public profile in the election campaign. By this method it is most likely Steve Brown will win a place as a councilor on the Alice Springs Town Council.