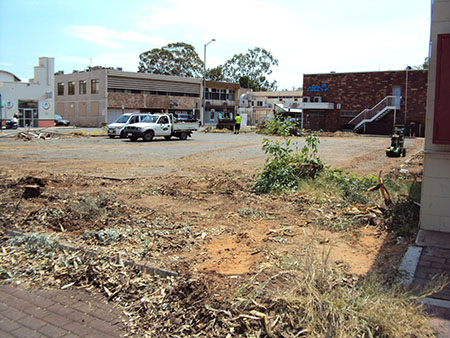 The ANZ carpark – from which all vegetation including mature trees was cleared on the weekend – is owned by Yeperenye Pty Ld. Alice Springs News Online put the following questions to the company this morning:
1. Why were mature red gum trees chopped down in the ANZ carpark?
2. Was management aware that it has been recommended that these trees be protected as part of the revitalisation plans for Parsons Street?
3. Does management  believe it has some responsibility as a corporate citizen to cooperate with public plans for the revitalisation of the CBD?
3. Did management consult with the Town Council about its decision to destroy the trees, given that council is the project manager for the revitalisation projects?
4. Does management consider it a service to its customers to remove all shade from the carpark when this is a desert town?
We received the following reply from Yeperenye’s Marketing Manager Nicole Walsh:
“The property in question is privately owned by Yeperenye Pty Ltd which reserves the right to make all decisions in relation to it.
“The trees in question have caused major water ingress problems to the adjoining ANZ and Leichhtodd Plaza buildings (resulting in rectification works  in excess of $100,000)  and some of the larger trees were diseased, causing potential health risks to passing pedestrians from boughs and limbs snapping.
“A beautification program for the property including the planting of smaller, safer trees and shrubs will be completed shortly which will benefit those ANZ customers who are the only ones allowed to park on it.”
The Alice News has asked for further explanation regarding the water ingress problems and the diseased state of the trees and also whether the smaller trees intended to be planted will offer shade.
Pictured: The scene of destruction last Saturday – view from Leichardt Terrace.

By ERWIN CHLANDA The impending bushfire season will be less dangerous because of the drought but fuel – mostly buffel, which in South Australia is...
Read more
Issue 40

LETTER TO THE EDITOR Sir – It was the best of times, it was the worst of times … with apologies to Charles Dickens. Our two...
Read more