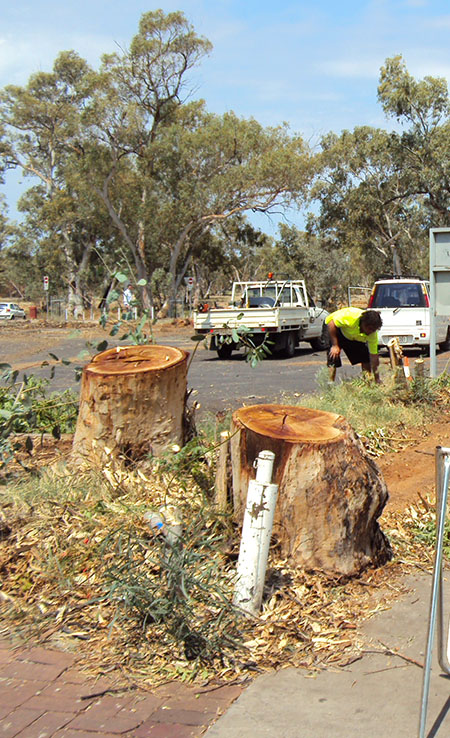 UPDATE: See separate story for statement from the landowner, Yeperenye PtyLtd.
How we love a bull-dozer or a bobcat and a chainsaw in this town! Mature trees, including red gums, have been chopped down in the ANZ carpark on the corner of Parsons Street and Leichardt Terrace. Yet these very trees were supposed to be protected for their contribution to the Parsons Street “biodiversity corridor” that is envisaged as part of the revitalisation of the CBD.
The plans for this and other projects identified after a three year consultation process are currently on display at the Town Council, which has $5m in its kitty to start the work.
The idea of the biodiversity corridor is to connect the ancient red gum west of the Sails with the Todd River. Mike Gillam was commissioned to develop a creative brief for the project and wrote about it extensively for this site on October 13. In the brief he advises specifically that we “protect existing mature red gums including those in the carpark behind ANZ. These provide a vital stepping point in the sightline between the [ancient red gum] and the river”.
It’s now too late.
Anyone who has lived for any length of time in this town will not be surpirsed: remember Turner House, Marrons Newsagency, Lizzie Milne’s block (still vacant), the Aboriginal Art and Culture Centre (still vacant), the trees in Gregory Terrace (never replaced), all the trees in the Todd that no-one has tried to adequately protect.
The Alice Springs News Online asked Mr Gillam to comment on this latest site to fall victim of the bull-dozer mentality.
Says Mr Gillam: “Given the magnitude of the problems facing Todd Mall and Parsons Street I find it demoralising that the red gums have been removed just a couple of months after I highlighted the value of these trees to the street. I’d be surprised if my observations were not communicated but it’s possible.
“In the absence of tree protection by-laws, private landowners will keep pleasing themselves. It takes many years for a Eucalypt to reach this size and on a whim it can be removed in an afternoon. Where are the checks and balances that would test the logic of such decisions and their potential impact on the whole street?
“Unfortunately there is very little advocacy on behalf of trees anywhere in Alice Springs – look at the management of the Todd River. Greening Australia has now completely withdrawn from the town and despite the importance of trees to our regional identity there is no arborist on staff anywhere.
“The slowdown in the Alice Springs CBD is not unique – all over Australia, retail zones are struggling, some streets and malls are dying. Business owners need to step out of their silos and also look to the health and vigor of their neighbours, their street and their community. We need to ensure that the revitalisation of Parsons Street is not undone before it begins. In isolation, the loss of these trees may seem trivial but decisions like these can rapidly accrue in the negative.”
The Alice News will seek comment from the proprietors and the Town Council on Monday.
Pictured: Top right – the scene of destruction this afternoon. Below – the trees as they were, connecting this site to the stands of trees along river bank at the end of the street. 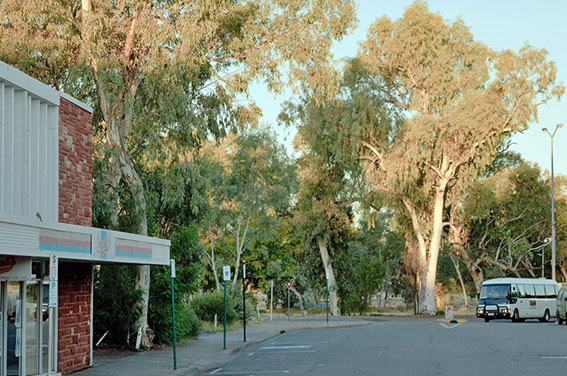