China is waiting – what's keeping us? 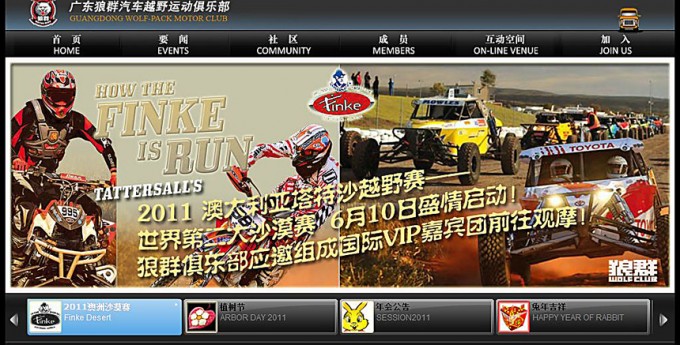 PHOTOS: Below – Art dealer Sun Kongyang from Shanghai trying a grub. Below right – Jade Yang and Mr Sun with local artists Audrey Nampitjinpa and Doreen Nakamarra on a witchetty hunting trip in The Centre organised by tourism operator Steve Strike. Middle of page – Mr Strike at a planning session in China. Above – The Finke Desert Race promoted in China to lure visitors to The Centre. 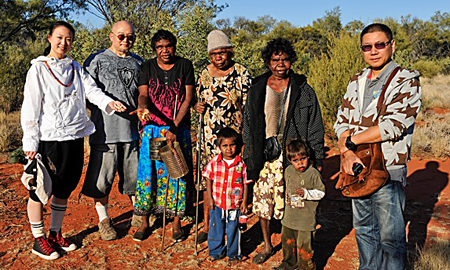 China has more than a million ‘dollar millionaires’; their number has swelled by 31% in 2010, according to Bloomberg; they’re within eight hours’ flying time and pretty well in the same time zone as us. That’s the good news. The bad news is we don’t have much of an idea of how to turn them into customers for our ailing tourism industry. Alice photographer Steve Strike is a five year veteran of the China trade, focussing on art and special tours. He says the only way to success in China is the hard, old-fashioned way: footslogging and nurturing personal relationships. “Don’t think you can sit in front of a computer, doing modeling and crunching data, and China will come to you. “It’s not going to happen. “Forget glossy posters of Ayers Rock and the Twelve Apostles in the Shanghai subway. “That’s not a call to action. It doesn’t tell people how to get here. “Get on a bomber, fly to China, make some contacts, face to face, develop trust and familiarity, and people will come to you. “The Chinese don’t like middlemen. “It might take five days to do a deal. “It’s a very old fashioned, cultural thing. “They want to deal with the operators direct, face to face, with people they have met and have a rapport with. “The Australian practice of hiring on 12 month contracts, confronting clients with new people all the time, that just doesn’t work there. “And you’ve got to do it all yourself. No-one is going to help you.” Mr Strike has little confidence in the ability of government promoters to have much of an impact. He has an office in the southern industrial city of Guangzhou. The rent is just $150 a month. He has an English speaking assistant for $100 a week. Hong Kong is just across the strait. The nation’s commercial “heartbeat” Shanghai – population 21 million – is not far. 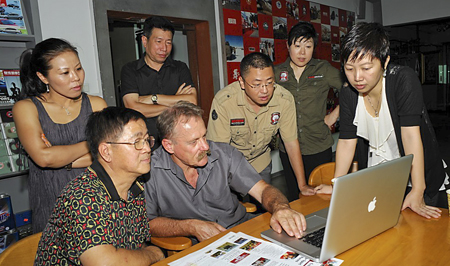 It’s the “can do” corner of the world. Mr Strike will soon be taking Mayor Damien Ryan and Finke Desert Race chief Antony Yoffa to China. This will be the next step to entice Chinese visitors to the race. An advance party has already been here, this year, and next it is planned to have two professional drivers from China taking part in the race, followed by a gaggle of spectators and media. Local film maker Simon Manzie made a five minute film clip of the Chinese at the race – and of the landscape around Alice. Mr Strike says Chinese want to do stuff, rather than gawk at things. A trip to the Finke race will probably be followed by an “extreme” 4WD excursion to the West MacDonnells. Driving on rough tracks through the empty wilderness of Central Australia is a fascinating adventure for people living in frantic cities with populations of 10 million plus. Says Mr Strike: “They’ve never done anything like it. “We took them to Palm Valley, the Finke was flowing, we raced the Widowmaker track just out of town – they loved it.” In a country of 1.3 billion (on a land mass only 35% bigger than Australia) it’s not hard to get a massive audience: The Finke clip was seen by 16 million people on the sports program of the Guangdong province TV station. The Chinese 4WD club Mr Strike is in touch with has a membership of 30,000. He applies the same strategies to his efforts in the art world. Developed over years, consolidated in lots of “banquets” in private rooms of restaurants, Mr Strike’s personal relationships are now bearing fruit. He has the contacts to artists here, and his Chinese opposite knows dealers as well as private buyers: “His A-list art buyers are all extremely wealthy. 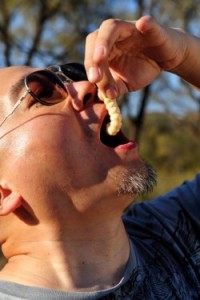 “They would spend $1m a year on art for their personal collections.” When a small group came to this year’s Desert Mob fair, the buying was followed by a bush trip with local artists Audrey Nampitjinpa and Doreen Nakamarra digging for witchetty grubs – and, of course, the visitors eating them. “They want to meet the artists, see their country, watch them paint, go hunting, have some bush tucker.” Mr Strike says the opportunities are breathtaking. Last fiscal year 57 million Chinese nationals went on an international holiday. It will be 64m this year. Yet the obstacles to that booming trade are severe – and all of our own making. To get from China to Alice Springs is a nightmare, says Mr Strike. With Qantas having a stranglehold on the allocation of routes and apparently not considering Darwin as suitable, there are no direct flights to the NT. Mr Strike usually travels via Manila which has direct flights to a string of cities in China. Air travel in China costs a fraction compared to flights within Australia , says Mr Strike. A ticket from Guangzhou to Beijing – a three hour flight – is $80. A ticket from Darwin to Alice Springs – a one hour 55 minute flight – is $617, the dearest sector in Australia. That’s if the Qantas flights aren’t booked out, usually by NT public servants or mine workers.
Meanwhile Tourism Minister, Malarndirri McCarthy, has announced EC3 Global as the successful tender “to assist with the development of a new tourism strategic plan for the Northern Territory”.
The firm’s first task will be to “work with Tourism NT to finalise a consultation plan to incorporate an exciting range of community consultations, which are due to be launched in November … including open regional workshops in Darwin, Nhulunbuy, Katherine, Tennant Creek, Alice Springs and Yulara; small working groups with key stakeholders; an online survey and public submission process, ‘big talk’ sessions in select Indigenous communities; and an expert tourism industry panel to market test the strategy.”
The new Five Year Tourism Strategic Plan is expected to be launched in early 2013, says Ms McCarthy.

LETTER TO THE EDITOR Greetings, Erwin. I attended finals of the AFL code at Traeger Park. On the Saturday It was the grand final of the...
Read more