The wicked flee when no-one pursues 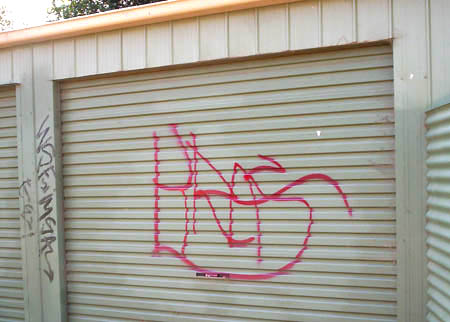 By ALEX NELSON
My unit adjoins a garage that accesses a public laneway at the rear of the property.
At 2:15pm on Thursday, 22 September, I was in my unit when I heard the rattle of a spray paint can followed by a hissing sound just outside the garage roller door.
I picked up my little digital camera, switched it on, and proceeded silently to the gate in the rear fence. As I stepped out into the laneway I noticed the distinct smell of wet paint. A large squiggle of red paint – a tag – had appeared on the exterior of a garage roller door.
Two big teenage lads – both taller than me – were already some distance away, walking towards the Todd River. Neither was Aboriginal.
I said not a word but raised my camera, zoomed in a little, and snapped a photo.
The lad on the left chanced to look behind and saw me with my raised camera. He must have warned his mate – they both walked a few more steps then bolted just as I took my second photo.
A similar event had occurred a few days earlier, on Saturday, 17 September, and also at 2:15 pm.
On this occasion I was actually in the garage when I heard footsteps approaching outside. From the murmur of voices there were at least two individuals who had stopped just outside my garage door.
Then I heard the sound of creaking metal as pressure was applied to the frame of the roller door. Were they attempting to break in?
After a couple of seconds it was apparent no, they were painting! I called out loudly: “What are you doing?”
This was followed instantly by the sound of running feet as the two anonymous scoundrels took flight.
By the time I got to the laneway there was no sign of anybody, but the middle pillar of the garage featured a still-dripping, freshly painted black tag.
As I stood in the empty laneway I recalled a favourite biblical quote: The wicked flee when no-one pursues but the righteous are as bold as a lion.
All the same, I wonder how a youth curfew will curtail the behaviour of well-heeled white youths whose anti-social activities are perpetrated in broad daylight?
UPDATE: Police have informed Mr Nelson that the youths were identified from the photo by their school principal. They ran but they couldn’t hide!