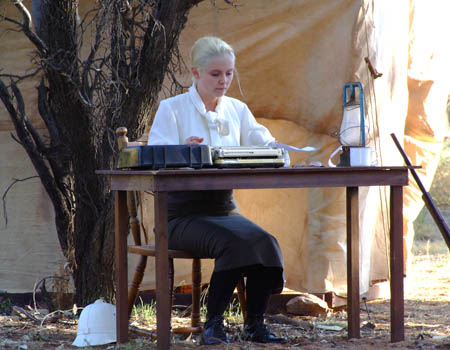 We live in a landscape full of drama – its grand forms, rich and changing colours, its dazzling light deepening at dusk, softened at dawn, its ancient stories imprinted in the sand and rocks, its spaciousness and then its more intimate folds. No genius of stagecraft could ever equal it – all credit to the team behind The First Garden for recognising this and risking the challenges for the presentation of their play.
The gods were with them on Saturday evening for the premiere of the play, written by husband and wife team, Chris and Natasha Raja. It tells a story about Olive Pink and the creation of the botanical garden that bears her name and is staged right there, where she once lived, at first in a tent, later in a rudimentary hut. The wind was still, there was no smoke darkening the sun; it was warm without being hot. The afternoon light came slanting in from the west, drawing out the characteristic orange glow from the rocky hill behind, and creating a dance of light and shade through the trees and grasses.
The audience sat facing south and it was so lovely it would almost have been alright for nothing more to happen. But then Miss Pink, played by Natasha Raja, appeared over the hill, triumphantly carrying a dead perentie. She cried out excitedly to a man we couldn’t see, speaking partly in English, partly in an Aboriginal language. He replied sternly, angrily, telling her she has spoken of things she should not have: she must go, she is no longer welcome.
It was a great way to start: with admirable economy, the foundation of the drama was established – the core Australian dilemma of trespass on other people’s country – and the theatrical space was created. The little company would continue to use this large space in the unfolding scenes, wordlessly evoking something of the physical rigours, the isolation and vulnerability that Miss Pink endured while also, on this perfect evening, effortlessly conveying the peace and beauty of the garden and the splendour of the valley and ranges to the west. When Miss Pink in the play extolled the magnificence of the “dog’s nose” (Alhekulyele / Mount Gillen), this drew an appreciative “Yes!” from Arrernte custodian Doris Stuart, seated in the front row, and no doubt unanimous if silent agreement from everyone present.
Much of the play is concerned with Miss Pink’s championing of what she saw as the rights of Aborigines and her condemnation of the various ways in which the forces of white settlement had disrupted their traditional land tenure and way of life. The characterisation emphasises Miss Pink’s genuine anguish as well as her zealotry on the issues, with the balance falling enough towards anguish to keep the audience’s sympathies with her. It de-emphasises Miss Pink’s famous eccentricity, getting right away from the madwoman cliches in favour of rendering her behaviour as part of the fabric of her utterly unusual life. 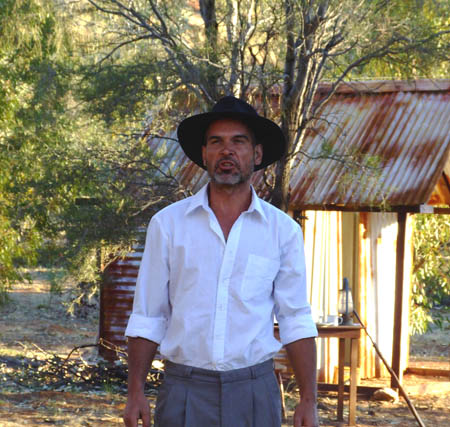 Much of her inner conflict over the path that she has chosen is revealed through dialogue with her long-dead fiancee, Captain Harold Southern. This strategy is effective dramatically, and allowed the articulation of the colonial stock standards – “we did something with the country” –  but it also reinforces the impression of Miss Pink’s almost manic self-belief. What is interesting for the audience is to hear a discourse from another time (Miss Pink died in July 1975, at the dawn of the self-determination era in Aboriginal politics) that is so little changed in certain quarters today. With the pronouncements we heard on Saturday – which appear to be drawn from her letters – Miss Pink would have found a ready place in certain activist circles today. But in her lifetime hers was a lonely voice, brave and ahead of her time.
The echo of today’s political discourse sounded the wrong note, however, in the characterisation of Johnny Tjampitjinpa, Miss Pink’s Warlpiri friend and “gentleman gardener”. Where did this angry, sometimes ironic, sharply analytical perspective on inter-racial relations come from in a man who had chosen to leave his traditional life and country and align himself with a marginalised white woman embarked on a marginal if visionary enterprise? I needed some kind of exploration of what might have driven this man’s unusual choices to give credence to what I was hearing him say.
For me this was really the only jarring. There was fine acting by Natasha Raja, a young woman who played an old woman convincingly and without caricature, as well as by Scott Fraser and Eshua Bolton, each of whom took two roles. All three had excellent voice projection, essential for this un-miked production. Direction and production design were handled with a light, sure touch by, respectively, Steve and Kristina Kidd. Live music, directed by Christopher Brocklebank, added beautifully to the overall experience and helped hold together the various transitions. Producers Simha Koether of the Central Australian Producer Program, Scott Large of the Alice Desert Festival and Ben Convery of the Olive Pink Botanic Garden can all take a bow for bringing to us a rewarding theatrical experience with its roots deep in this much-loved garden and the life of its extraordinary founder.
The play will be presented again this Thursday to Sunday, 5pm.
PHOTOS: Top – Natasha Raja as Miss Pink. Centre – Eshua Bolton as Johnny. Below – Scott Fraser as Henry Wardlaw. Courtesy Ben Convery. 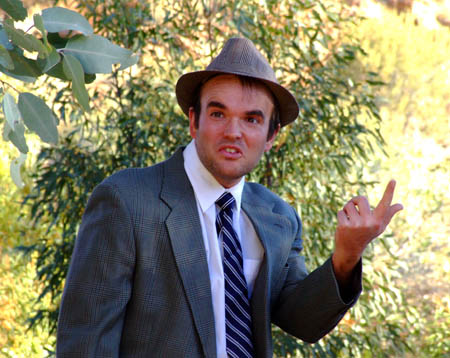