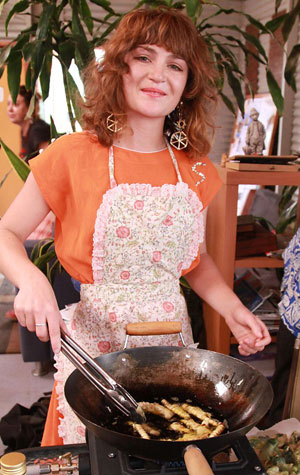 A burger ‘n’ chips with a difference won the wildfoods/bushfoods competition final on Sunday. Its creators were Michael La Flamme and Pamela Kiel, who have been regular competitors since their “Gecko’s Revenge” – a sausage made from feral cat – won people’s choice in 2006.
In the intervening years the couple’s culinary creations have moved towards more subtle messages about food in our environment. On Sunday Michael said their aim was to create an everyday  dish with a taste like the smell you get when you step off a plane in Alice. At the moment, he said, that would be eucalyptus, acacia and smoke.
They made Kaiser rolls, given a nutty flavour with mulga seed (Acacia aneura), both in the dough and with a sprinkling on top. The rolls were spread with a lemon myrtle mayonnaise and filled with thinly sliced kangaroo meat that had been marinaded in a rosella (native hibiscus) and native pepper glaze and smoked with red mallee (Eucalyptus socialis) gumnuts. The meat was fairly rare, sliced after cooking, and was moist and tender, layered with blanched saltbush leaves (using the new growth off local plants), cucumber and fetta. They served the roll with potato crisps flavoured with native thyme.
Judges, of whom I was lucky to be one, were impressed by the elaboration of the dish – the wide range of ingredients to give simple fare an exceptional character. In particular, their bread was appreciated – the absence of excellent fresh bread from the marketplace in Alice, lamented. Judges admired the fine texture of the dough, the crafted form – the Kaiser roll has a pinwheel shape – and marvelous wattleseed flavour.
Guest judge, visiting master chef Andrew Fielke, commented on the appealing taste of the mulga seed. The more common wattleseed in the marketplace is Acacia victoriae, with a coffee-like aroma, well-suited to dessert preparation or – as we discovered on Sunday, thanks to a trio of Young Foodies – great in a milkshake.
In second place was another regular competition entrant, Ange Vincent, with her bush orange and Burdekin plum membrillos. These are fruit pastes, served with cheese and biscuits.
Ange keeps her eye on the larder in our backyard – the bushland all around us – and harvests her ingredients as they become available, freezing them when possible for later use. The setting and ripening of the fruits of desert plants varies with conditions, she explained. The bush orange should ripen on the tree and, having identified a number of plants with fruit last year, she watched and waited until the time was right. This membrillo had a marvelous jewel-like colour, a translucent orange blushed with red.
The Burdekin plum paste was a darker red and more opaque. These trees are native to Australia although not to the desert, but are planted in Alice as street trees. Ange harvested her fruit from a carpark in the centre of town.
She has made her reputation in the competition from her elegant adaptations of classic European recipes using key native ingredients. This was no exception.
Energetic newcomer to the competition, Ronja Moss created a fresh dish for the finals. In her heat she had made a dessert, featuring quandongs and wattleseed. On Sunday she served what she called “Asian Charba” – witchetty grubs in a tempura batter, accompanied by a wattleseed and honey sake. She’d gone digging for the grubs herself, together with some Aboriginal women friends. Four hours of labour had produced a dozen grubs. Andrew Fielke complimented her on the “nose” of her sake – the wattleseed aroma was quite distinct – and on her imaginative combination of a quintessentially Australian ingredient with a classic of Japanese cuisine.
All three winning entries involved some harvest from the wild by the cooks themselves. This is a nice reminder of the original motivation for the competition, which was to raise local awareness of the bounty of the Central Australian bush that nourished Aboriginal peoples for countless generations. To know how to source food from the bush is to start understanding its character and rhythms, to start caring for it more deeply. Perhaps next year’s competition could underline this dimension by stipulating at least one local native ingredient in each recipe, with a bonus for direct harvest.
PHOTOS: Top – Judge Beat Keller musters his courage before tasting a witchetty grub. By Peter Carroll.  At right  – Ronja Moss gives the grubs an oriental touch. By Edan Baxter. 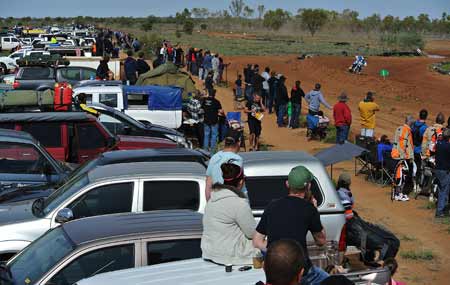