The Federal Government scheme which turned the Henbury cattle station south of Alice Springs into “the world’s largest carbon farm” will be a model for other pastoralists wishing to diversify, says Federal Environment Minister Tony Burke.
He says so far there no similar applications have been made for funding under the National Reserve System which contributed $9m – two-thirds of the purchase price.
The new owners, RM Williams Agricultural Holdings, are planning to turn the 500,000 hectare property “into a nature reserve, effectively removing thousands of cattle from the food chain,” as Nationals Senator Fiona Nash puts it.
She also asked what checks and balances are in place to ensure accountability for the taxpayers’ contribution and would RM Williams have to repay the grant if the property is sold?
How much of the revenue from carbon trading will be invested back into the Henbury project, and how much will go to the company’s profits?
Mr Burke replied: “By establishing the science and the economic model for generating income from carbon farming, Henbury will offer a new potential income stream for pastoralists who wish to diversify.
“A key requirement of the funding deed is an in-perpetuity conservation covenant for the property.
“If the property were to be sold, the new owner would need to manage it for conservation under the same conservation covenant.
“The contract ensures that any revenue first funds the ongoing conservation of the property.
“There are also measures for distribution of any additional revenue to investors and new in-perpetuity conservation trusts.”
Alice Springs News Online asked Mr Burke whether there is an opportunity for Aboriginal landholders to get some income from carbon credits, using Henbury as a template. If so, how would it work?
Mr Burke said Henbury “will act as a large demonstration project testing the potential to store carbon in Australia’s rangelands and to create an alternative income stream for landholders from carbon credits, including Aboriginal landholders.”
Photo above: The Finke and the Palmer Rivers flow through Henbury Station. The Finke is the oldest river in the world. Below: The homestead. Photos Federal Government. 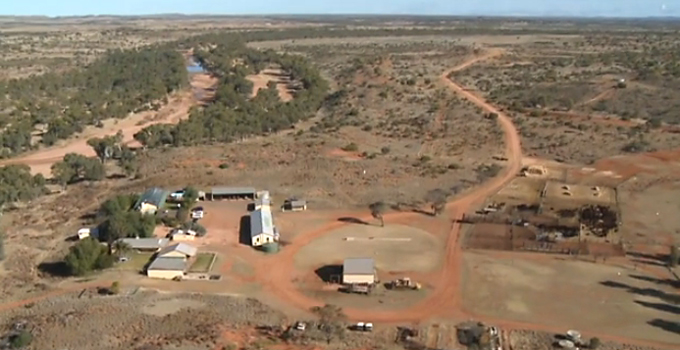