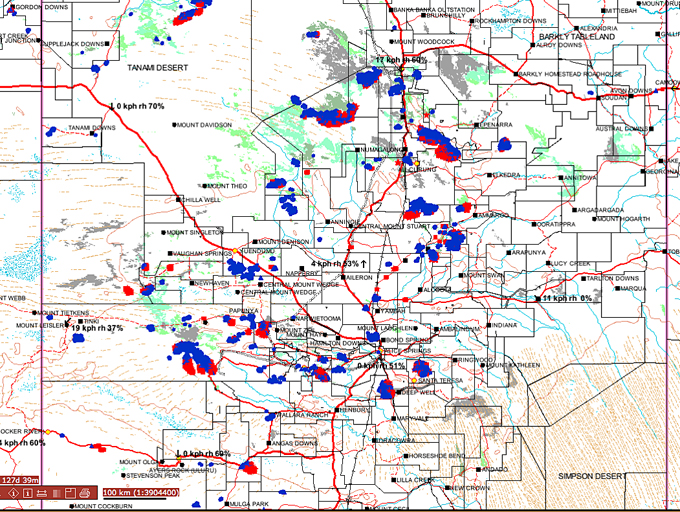 Lots of fires are burning in Central Australia but the danger will get much worse when the hot season starts, says the Bushfires NT’s Grant Allan.
The fires are about on par with the last season of high rainfall, in 2001/02. Again the summer will be volatile and land holders are encouraged to take immediate action to prepare, including undertaking management burns when conditions are appropriate and low temperatures still allow them to be done safely.
Mr Allan says these prescribed burns will prevent fires getting out of control as happened 10 years ago.
People in the bush should act now to protect their communities, homesteads, bores and fence lines, by grading fire breaks, reducing fuel loads and patch-burning.
It seems all the fires on the map have been deliberately lit – there has been no lightning about – but it is not clear which of them are controlled burns and which got out of hand.
Mr Allan says the Central Land Council, the NT Parks Service and some pastoralists have carried out extensive controlled burns during the past three months.
Before the declaration of the summer fire season, for the area beyond the 50 kilometre radius of the Alice Springs fire protection zone, permits to burn are not required.
The summer fire season is usually declared during October but given the massive fuel load, it may be started as early as September 1.
Mr Allan says the warmer weather in the past few days has led to bigger and longer burning fires, whereas in the recent cold weather they usually went out overnight.
There are far fewer fires in the areas in Queensland and Western Australian either side of the Territory (the mauve lines on the map running north-south are the borders).
Colour code for today’s fire map, showing about a million square kilometres: Blue – fires in the past 7 days; red – 6 to 12 hours ago. Green and grey areas are “fire scars” from blazes earlier this year. The arrows show the wind speed and the percentages denote relative humidity. The readings are taken at TiTree, Kintore, Uluru, Alice Springs, Jervois, Rabbit Flat and Lajamanu. Map courtesy Bushfires NT. Up to date map here.