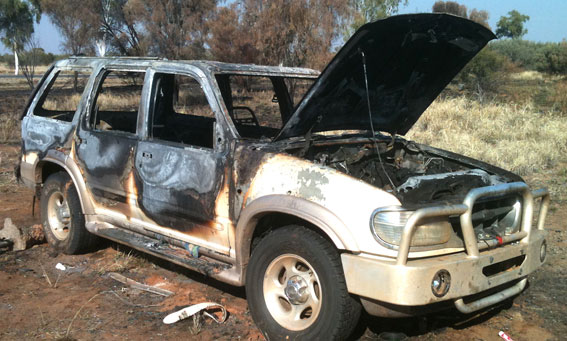 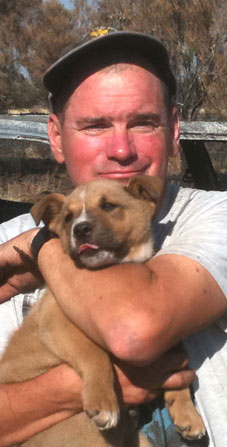 A man who would give his name only as Sean arrived in Alice one night about 10 days ago. He says there was a hole in the sump of his 4WD and he could drive no further. He pulled up in an open area off the Stuart Highway, not far from the Colonel Rose Drive turn-off, and made camp.
The next day he says he began calling mechanics to get help to fix his car but they were all busy. He says he also called camping grounds but, as he was travelling with his puppy, Sharko, they didn’t want to take him.
He says he received a visit from the Australian Federal Police, stationed at the airrport. He explained to them that he was not camping but broken down. In the course of the week he started work on repairing the car himself. Some Alice locals also offered as helping hand.
After a further visit from the police, he was obliged to find accommodation and on Saturday night did find a camping ground that would accept him with Sharko.
When he returned to the car on Sunday, it was a burnt shell. He found the Stillson wrench that he had left under the car on the front passenger seat, indicating that it had been used to break the window to gain entry to the car.
The interior was so completely burned Sean could not tell whether anything had been stolen.
Theft would be one thing, he said, but he wanted to know why whoever was responsible decided to destroy the car. Good question.